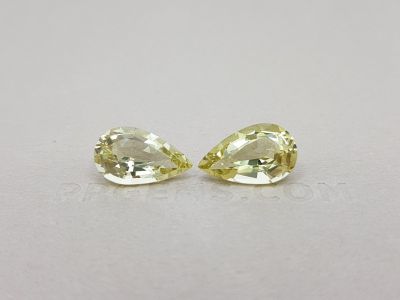 Heliodors are a variety of noble beryls that have a variety of lime-yellow and golden-green colors. The presence of iron ions determines the yellow coloring of heliodors. Natural yellow beryls, known as heliodors, have yellowish-green, straw-yellow, golden and honey-yellow hues. The name of this fascinating gemstone comes from the Greek words helios, meaning sun, and doro, meaning gift. At the beginning of the 20th century, geologists discovered a large deposit of heliodors in Namibia, which were a unique golden-yellow color. On the jewelry market, these stones were known as "golden beryl.

It is quite rare to find high quality large-size heliodors. But it is in large specimens that its golden color reveals itself best. Heliodorus minerals, a member of the noble beryl family, have a heavenly purity. Its high hardness allows us to make a great mirror-like polish that gives a fantastic play of light on its facets. Natural stones are known for their resistance to all kinds of external influences.

The best jewelry manufacturers, such as Tiffany & Co., Dior, Louis Vuitton, include exquisite jewelry with heliodors in their collections. This is a rare occurrence due to the lack of popularity of gold beryls.

The lack of greenish and brownish shades greatly increases the value of heliodors. The most valuable are the minerals with bright yellow shades that are present on the shelves of jewelry stores quite rarely. The regular yellowish-brownish stones do not cost that much. One can buy heliodors in this category for a few tens of dollars per carat. Natural stones rarely have internal or external flaws. Because of this, even small inclusions and cracks greatly decrease the price of stones. Large, gem-quality, golden-yellow stones can be as much as $60 to $120 per carat.

The best yellow beryls come from Brazil. The deposits located in the state of Minas Gerais give around 90% of the world's production of these stones. Heliodoras are mined in Russia (Sherlovaya Gora deposit in Transbaikalia) and Ukraine; also high quality samples are mined in Namibia, the USA, Sri Lanka and Madagascar.

When heated to a temperature of 4.50° C, the minerals change their golden-yellow coloring to aquamarine shades. When exposed to the rays of a certain spectrum the coloring may change to orange. However, the changed coloring of the ennobled specimens is short-lived and reversible. As time passes, the original colors are restored. It is necessary to mention that the most part of the low-price aquamarines sold on the Russian jewelry market are enriched heliodors.