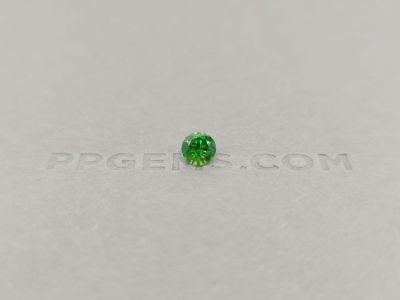 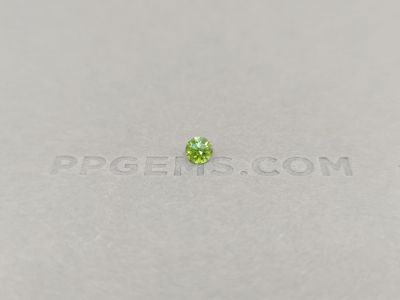 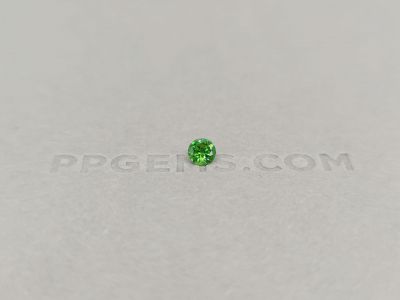 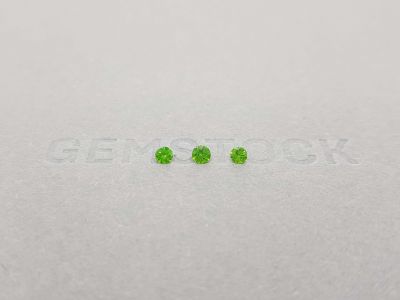 Demantoids are the rarest and most expensive representatives of andradites, a type of natural garnet. The presence of chromium and iron impurities determines their bright green color. The rich color palette of demantoids includes bluish-green, brownish-green and yellowish-green hues. The presence of yellow tones is due to the presence of titanium impurities. Different variants of color intensity are observed, varying from pale to rich tones.

The faceted demantoids are made for the play of light, like diamonds. The beautiful and fascinating rainbow that appears on the facets of the stones is due to the high dispersion index (0.057). This value is greater than that of diamonds (0.042). That is why the diamond cut for demantoids is, as a rule, a diamond cut for maximum disclosure of the play of diamonds. Hence the name, which can be translated as "diamond-like.

The first finds of demantoids were made in 1868. The Finnish mineralogist Nils Nordschild discovered the stones among the gold-bearing placers near the Nizhne-Tagilsk factory in the Urals. The largest Sysert deposit was discovered in 1874. The amazing beauty and size of the Sysert demantoids struck the imagination of contemporaries. In the same 19th century, minerals began to be mined on the Bobrovka River.

Modern Ural demantoids are a brand, like Burmese spinel, Kashmir sapphires, or Columbian emeralds. The price of the Ural stones of high gem quality rises from year to year and can go over $10000 for 1 carat. Samples over 2-3 carats are extremely rare and are considered unique. Experts believe the presence of inclusions of fibrous bissolites formed in the form of a "horse's tail" is a determinant feature in diagnosing the Ural demantoids. In this case, the inclusions have a positive impact on the value of stones.

Other types of demantoid are mined in the Ala Valley (Italy), Sri Lanka, Pakistan and Iran. The main exports of quality stones to the world jewelry market come from Namibia and Madagascar. Namibian demantoids are distinguished by good clarity and a wonderful play of light, but they have one major disadvantage: the lack of bissolite inclusions, unlike the demantoids that are mined in the Urals. African stones can reach 3-5 carats, but their play and richness of color are much lower than that in the Urals.

A demantoid is the only variety of gem-quality garnet that can be enhanced (low-temperature treatment) to make the stone greener, lighter, or to remove its brown hue. The world community of gemologists has learned relatively recently that demantoids can be thermally treated. This is why the gemological laboratories do not always state in their expert reports that the stones contain traces of heat treatment.

The high-quality demantoids are used by the famous jewelry houses to produce exclusive pieces of jewelry. The most famous jeweler in the world is Tiffany & Co. Green garnets appear in a number of works by Russian writers. The workshop of the famous pre-revolutionary jeweler Karl Faberge very often used demantoids in making unique jewelry.

Surprisingly, the bright green garnets were considered the most expensive stones in the tsarist Russia. After being forgotten for a long time during the 20th century, the demantoids regained their popularity. But in the showcases of jewelry stores there is practically no jewelry pieces with these wonderful stones. The reason is the high cost of demantoids, which is often several thousand dollars per carat. That is why the true connoisseurs of fine jewelry order the pieces with green garnets from private jewelers. The most highly valued are the Urals minerals with the best quality characteristics. Rings and rings with demantoid are attractive not only to women but also to many men.

Fashion trends determine the conditions for wearing rings and earrings with demantoid. Experts recommend wearing jewelry with green garnets for evening events in order to maximize their dispersion. Modern jewelry collections are often adorned with pieces that combine demantoids and other precious stones such as diamonds or sapphires. Collectors spare no expense to add to their collections a necklace with demantoid and sapphires or an entire set of jewelry based on green garnets and diamonds. The cost of collection pieces runs up to tens of thousands of dollars.